I did a triathlon this past weekend at Blanchard Park.  It was my 4th triathlon ever and my 3rd time doing the Blanchard park triathlon. The week before the event I trained with my friend at the YMCA with swimming and biking. Also if you don’t know what a triathlon is it is a event with a distance where you swim, bike then run after. This triathlon was 60m of swimming then 5mi of biking and finally 1mi run. That was the 11-14 age group distance and my brother and his friends was shorter.

When the race came I thought I was nervous and I didn’t so good as I did in training.

It was really tiring going to swim to bike really quick. When I was on my bike I realized there was a lot of up hill and down hill.  Then after biking we went to running and that is when it got hard. You have to use your legs a lot. I had to stop and walk once and when I finished I sprinted to the end.

At the end I thought I didn’t place and I was tired so we left early before the award and when we got home, my mom got a text saying I got 2nd place in age 12. The person in front of me was my other friend I used to play baseball with and he  won by 8 seconds.  My time was 39:47.

Overall I was happy with my place because I didn’t even now I got 2nd and I can’t wait till the next triathlon. 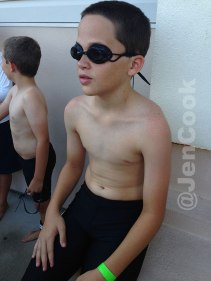 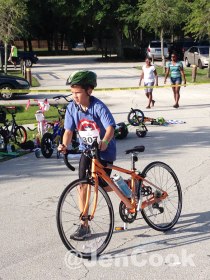 Transitioning from the bike to the run at the Blanchard Triathlon!

And he’s done! With a second place finish!

And they both finished the Blanchard Triathlon!