I just got back from a trip to Michigan to go to football camp at Michigan State.  The crazy thing was we just got back from Marco Island and went to a going away party for a friend. The next morning I had to wake up at 5:30 to get on a plane. On this trip it was only my dad and I. We got ready and we took off. We were going on Delta and they had free wifi and you could have watched movies and on their app. I watched Alexander and His Horrible Terrible No Good Very Bad Day and some of the Maze Runner.

When we arrived we got the rental car and we drove off to go eat at a coney island. It was my first actual coney dog. I liked it and I want to try another one again. After lunch we head over to my dad’s friends house which is a little less than 10 minutes away from the Spartan Stadium.

The first day of camp was long but really cool. There are different NFL teams where you are organized. I was in the Titans which I wasn’t excited about but it didn’t really matter. Each team had a coach and the coaches were players from the Michigan State football team. My coach was Brandon Clemons. He is a defensive tight and he weighs 305lbs.

The first day we stretched and the coaches introduced themselves. I also to took a picture with MSU Football Coach Mark Dantonio and the cotton bowl trophy. The first big activity was the offensive drills. Offensive drills includes QBs, WRs, and offensive line drills. After a break then there were Defensive drills its positions as LB, Defensive line and stuff like that. Then we had lunch and for lunch we had a wrap with cheese and ham, a cookie, chips. Then we went into the indoor practice field and did more drills. We also saw a video for MSU. Then we had dinner and we had chicken tenders. Then we played a razzle dazzle game. Razzle dazzle is like football but it is one hand touched and you can through the ball anywhere even if you are past the line of scrimmage. But the risk is  it still can get intercepted and incomplete. We played 2 games and we tied one and lost one. The scores were 14-14 and 21-14. In total I scored 2 touchdowns and had 4 interceptions. Then we packed up and left.

The second day was shorter but even better. We did the same thing as day one but for lunch was pizza and after lunch we went in the Spartan Stadium. We did a razzle dazzle game in their and we tied 14-14 and I got 2 touchdowns one was a pick six. I also got to go in the press box and watch other kids play razzle dazzle. After everything I got my jersey signed by most of the players that were their. Later that day we went to a tigers game and they lost 5-3 against the Reds.

The next day we went to the Ford tour at motor city and it was cool but I wouldn’t want to go everyday. At 7pm the plane took off and we came back home. When I get older I want to go back and stay at a dorm. So I want to go next year. 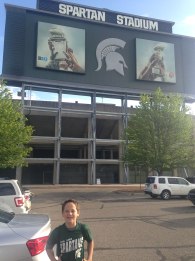 That’s me in front of coach!

Me and my coach, Brandon Clemons. 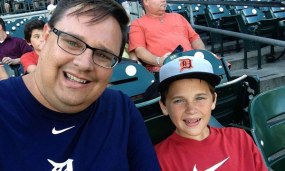 Me and my dad at the Detroit Tigers game.

Detroit Tigers game with a bunch of my dad’s friends from MSU.
Advertisement