We went to the Highland games on Sunday on a 4 day weekend. The Highland games is a Scottish Festival. They have game when you have to carry stone that weigh about 200lbs. Who ever has to gets the farthest for the day will get a prize, but I don’t know what. We walked around tents that had clan names. I bought a wooden dagger and my brother bought a bow and an arrow with pencil eraser on the tip. I had a sausage on a hotdog bun and it was delicious. Then are cousins came and we started playing games on a hill. While we were playing games were listening to Scottish music.

The next day we went to St.Augustine to go see the lights everywhere. We started to walk around and we went into some stores and looked around. We walked around but did not go inside the college that is there. We ate at a place called Columbia. It was a fancy Spanish place. We had sausage, scallops, chicken and cheese, shrimp, cheese, and bread with butter. It was great. After we walked around and I got soft severed ice cream. But after I felt like I was going to explode. We went home I slept in the car on the way back and we got there around 9:00pm. I had a great 4 day weekend. 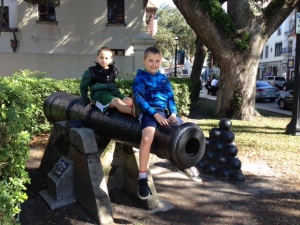 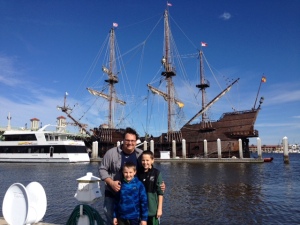