Before I went to Michigan I saw my great grandma and cousins. We played soccer and baseball. The oldest was a boy named Liam and he had two little sisters. And there were two babies.

Then next day we went to Michigan State and we looked around stores and I bought a cool hat. And we took a picture with a statue of Sparty.  He is the mascot. We also saw the football field, basketball, and hockey. 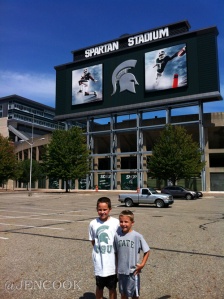 The next day we went on a picnic for my moms and dads reunion for college. All there friends were over there and I played croquet for the first time. I also had some friends there. There names were Luke,David,and Kyler. We also played kick ball. I was playing corn hole and we were playing till ten and it was 7 to 5 then I got the points to win!

After I had a sleep over. We watched a movie called Here Comes the Boom.  It’s all about wrestling. Then we went to sleep. Then we woke up and started driving. We went through Ohio,Kentucky,Tennessee and slept there then we derived through,Georgia and finally Florida. I liked that vacation.